The Charm of the Mountains

What’s in my own backyard: A CHEF Intern’s take on how leaving home can bring you back again

Community Engagement Intern Carrie Billett did not grow up in Central Appalachia, but the mountains of Harlan County, Kentucky are her home. She’s lived there since 2006 and would like to stay. She says, “What drew me to the mountains is the sense of community and the stories that come from here. I’m very fascinated by the identity that comes from living here.” 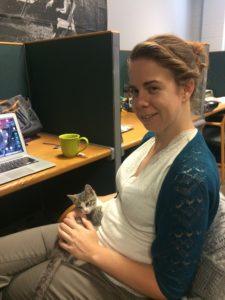 She grew up without a distinct awareness of Appalachia, even though she grew up in southcentral Pennsylvania. She says that growing up there is quite different from Harlan County. “I was surprised at how isolated some of the areas were but also at how rich the culture was,” she said. “When I initially moved to Harlan, I’d say that I was from Pennsylvania. They’d say ‘Oh, there’s coal mines there’, making that something to connect us.” She attributes that connector to being one of the reasons that she was so warmly received and not treated at all as an outsider, even though she’s only seen coal mines in Pennsylvania as a tourist and has never been exposed to life in a coal town. She does, however, recommend reading They Say In Harlan County to better understand the area’s history as well as to sympathize with the struggles that the town has worked to overcome. Personally, I also recommend watching Harlan County USA, as it holds the very real accounts of those citizens who participated in a bitter coal strike.

She plans to continue working in community-based projects like what she is involved in with COAP, hoping to incorporate her interest in socially practiced art and sustainable economic development. She said, “If I could have everything I wanted, I would work in an art-based organization and focus on education and small business incubation. I’d do event planning, have an art studio nearby, and teach…I want to focus on social and community crafts while focusing on stuff like health and education.“ In our discussion, she emphasized retaining the culture of Harlan County and areas like it, stating that she would like a thriving downtown. I asked her if she was worried that economic development would interfere with the cultural identity of the area. She had the perfect response: “Something I believe I can count on is that the charm of the mountains will persist.”

Sierra Marling is the Communications Intern at Fahe, bringing to the industry a fresh perspective about being a young professional in Appalachia. Away from the keyboard, she’s often training for her next 5K, reading a book, or playing soccer with her kids.